The “Getting Paid” Series: My Adventures in Small Claims Court 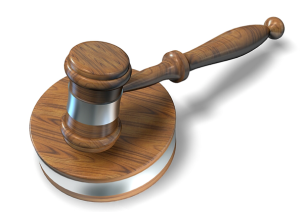 Last week, I walked in a county courtroom 45 minutes north of my home.  I sported my ‘church clothes’, used my best posture and anxiously-yet-confidently carried three copies of a thick booklet of evidence (aka “The Truth”) close to my body like a security blanket.  When I set those booklets on the court room pew, they gave an echoing “thunk“on the smooth, worn oak.

Speaking of “thunk,” I kept playing the colloquial phrase “Who’da thunk?!?” in my head as I peered back over my shoulder to watch the trickle of local characters enter the courtroom.  (Remember the show “Night Court”?)  How—after just 7 months of officially becoming my own business—did I end up here on the docket with the estranged couple battling division of property, the man dressed as Santa Claus suing his dry cleaner for ruining the fur on his suit, the weary fellow ill-prepared to get payment from a slick defendant who was all lawyered up?  I mean, really. Who’da thunk I’d have to resort to small claims court to get paid by a rogue client so early in my small biz adventures?

Yet there I was, and assuredly so, seeking overdue compensation for good work I carried out over a withering month back in the summer.   When it came to getting paid, I’d done everything on script:  submit invoice upon completion of assignment, begin gentle follow-up when terms were not met, escalate correspondence as invoice aged, state intention to take heightened action, send ‘demand letter,’ follow through on demand.  The defendant went from apologetically pleading for my patience to abruptly stating, uh, let’s call them ‘inaccuracies’ about our business arrangement.  She fell silent after I answered her ‘inaccuracies’ with copious documentation and clear demand for resolution.

I had to take action based on principle…based on the fact that I earned that money.  By. Golly.

Since it’d been over a month since she’d responded to me at all, I had nary a clue if the defendant would even show for the hearing.  At the last minute before the judge took the bench, she scooted in the back of the court room and was seated, a distant, stern grimace on her face.  The judge invited “any case for which either party has representation” to exit the courtroom to see if resolution could be attained prior to a hearing, then began roll call.  When he called my case, not only did I raise my hand; a man in a gray suit rose with hand extended.  “Your honor, I’m legal counsel for the defendant.”

She brought a lawyer.  A lawyer.  Mr. Gray Suit, Esq.  For this amount of money?  When I had such a clearly documented case?  Who’da thunk?!?

Gray Suit, Esq.  summoned me to the lobby immediately.  I grabbed my booklets and headed out, mentally coaching myself “game on…think before you speak…steady, steady.”

On the other side of the courtroom doors, he quickly stepped into my personal space.  “Now…I’m not here to strong arm or put you up against a wall…” he began.  Uh-huh.  I thought to myself “oh, you won’t,” dialing up the righteous indignation.    I knew my case, aka The Truth, inside out, backwards and forwards.  I wouldn’t have dared waste my time, the defendant’s or the judge’s had I not been certain I was in the right.

There was no strong arming me that day. By. Golly.

Gray Suit, Esq. proceeded to ask me three questions, which he obviously thought would be the crux of his case.

1.  Did I realize there was no signed contract for my work?  Yes, I was aware. (This was literally the only client relationship in YEARS that I’d not gotten a signed project quote upfront.)   Yet there was a clear verbal contract backed  by over 400 emails substantiating that I was in a business relationship with the defendant.  I was not at all worried, though a signed contract would’ve been handy.

2.  Did I realize that the defendant or the defendant’s business did not benefit from the work I performed…that my efforts had benefited a third party?  The defendant runs a marketing firm. I was retained to help her service her client, the third party.  So yes, of course I realize her business did not directly benefit from my PR, ad creation and marketing consultation.  But I helped her succeed in servicing her client.

3.  The third question was so dumb I don’t even remember it.

As I responded to Gray Suit, Esq.  I could tell he had no clue about the nuances of the situation.  When I would not be wavered, he averted his eyes toward the courtroom doors, evoked a little swagger and smugly uttered “Alright, we’ll have a little hearing.  This won’t take but about 10 minutes.”

I thought to myself, “10 minutes?  We’ll see,” and clutched my booklets tightly at my side.

Just what was in those booklets?  34 pages of chronological documentation of the origins, progression, conclusion and collections processes related to the work for which I’d not been paid.   Since I earn my living synthesizing and organizing information to make compelling arguments (usually to help people sell stuff), I called on those skills to prepare for court. I save every sent and received email and thus I had over 400 bits of correspondence to cull for this case. I spent oh-so many valuable hours organizing my booklet-with-thunk-value.  In the process, I came to know every broken promise, each false assurance, all pivotal statements by date, time, chapter and verse.

Back in the court room, I sat through three other cases awaiting my turn.  When the judge called my case, Gray Suit, Esq. stepped forward and looked at the judge.  “This won’t take but about 10 minutes,” he repeated his swagger slogan to the judge like the court was appeasing me.  Hmpf.

Next thing I knew, I was at a podium in front of the judge, Gray Suit, Esq. and rogue client to my right, in that order.  We took the oath, then I was up to bat, as the plaintiff bears the burden of proof.  Though I had 34 pages of The Truth, I knew full well the judge wouldn’t be reading every page.  I directed him to page 2 to begin making my case.  Page 2 had a statement provided by a colleague, the man who’d brought me in on the business, clarifying the nature and terms of my retention.  It was an ace-in-the-hole statement, but Gray Suit promptly objected.

“Any correspondence not from the defendant is hearsay evidence and can’t be used,” the judge respectfully informed me. Drat.  That’s ‘People’s Court’ 101; I should’ve known that.

“No worries, Your Honor,” I retorted confidently.  “I have enough emails directly from the defendant to completely substantiate my case.”

From there, I led the judge to Page 26 of the booklet where I had a beautiful trail of emails between me and the defendant.  I pointed out the good parts, those in-her-own-words noose tighteners. “I am so, so sorry for delay.”  “Please be patient.”  “I have your check in hand…  You’re most welcome. Again, I’m so sorry.”

Gray Suit took his crack at trying to crack the case.  He asked the defendant a few questions; she made it plain that the third party…the end client for whom we’d done the work…had not paid her.  Then I took a shot with a couple cross-examination questions, just to prove her deep-rooted involvement throughout the time I worked on the business.

Yep, I cross-examined. By. Golly.

The judge spoke up, and from the first few phrases, it was pretty clear he was leaning toward a favorable verdict for me.  Gray Suit coughed up a few Hail Mary arguments.  “Your Honor, this is a matter of convenience for Ms. Williams.  It’s much easier for her to file suit here in this county than try to get payment from the business owners who live in Arizona.”

I let him finish, then looked the judge straight on.  “I don’t appreciate him speaking for me.  I’m an independent business person.  I have to assign value to every hour of my day in order to put food on my table and pay my mortgage.  This is anything but convenient.”

The judge summarized the case, referencing the defendant’s own emails as the defining elements.  He stated it was clear the defendant retained me to bolster her service offerings to her client, led me to believe all along that she would be paying me and even claimed to have a check in hand at one point.  Thus, it was judgment in full for PLAINTIFF.

I’m still enjoying the victory, though now my attention is turning to the collections process.  As an independent business person, every dollar I earn really does matter, and I deserve to be paid what even a court of law acknowledges I’m owed.  In the meanwhile, I’ll gladly share with you lessons that I’ve learned and business truths that have been affirmed for me in this experience.  I hope my experience helps many others along the way; I really want to do justice by the justice I’ve earned!

2 Responses to The “Getting Paid” Series: My Adventures in Small Claims Court